from FictionZeal.com re: Foreclosure by S.D. Thames 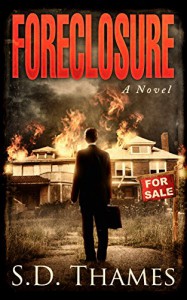 David Friedman didn’t start out wanting to become a hero.  He simply wanted to make partnership in the prestigious law firm, Hollis & Alderman.  But, he didn’t make it.

Disappointment doesn’t begin to express his feelings.  It’s the new year of 2008, and the firm is suffering due to the downturn in the real estate market, or at least, that’s what they want David to believe about the firm.  He remembered when they first picked him up, they’d promised partnership within seven years.  Now … the game has changed.

David picks up a new client, Frank O’Reilly, who is a real estate developer.  Frank has more lawsuits than he can shake a stick at.  Seems everyone who bought, and is now under water on their loan, is seeking a way out of their situation.  To many people, losing a lot of money is not acceptable and things take a very dark turn including blackmail, arson and murder.

The story takes place in Gaspar County in Florida.  It gives a fictional view of law firms with some very unethical agendas.  David Friedman is different but has trouble convincing people of that.  The novel has a satisfying dialogue and the pace is fairly fast.  David’s character is relatable; he’s flawed, but he tries to do the right thing – most of the time.  His new client, Frank O’Reilly, seemed more like a mobster than a real estate mogul.  But, there are some nice twists which are hard to see coming.  Rating: 3 out of 5.