from FictionZeal.com re: Destiny's Pawn by D.A. Keeley 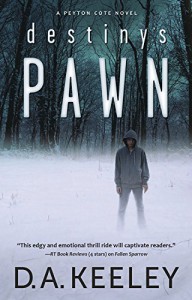 Peyton Cote is a Border Patrol Agent in northern Maine’s Aroostook County.  Her duty is to prevent anyone from crossing the border illegally.  As the story begins, she finds a lone thirteen-year-old Ukrainian boy seeking political asylum.  It was apparent to her he’d been in the elements for some time.  His name is Aleksei Vann.  His family’s home had been bombed by pro-Russian separatists.  His mother was wounded and his father, Dariya, sent him here by various means to live with his Aunt Bohana who lives in Maine.

Bohana Donovan has a family of her own and a son, Michael, who’d recently received an acceptance letter from the University of Maine.  He has a great appreciation for art.  He tells his friend, “That’s why I love it—it’s created for the benefit of humanity.  No one owns it.  No one has the right to do so.”  Michael knows a little something about the Boston Gardner Museum art heist from a quarter of a century before … something he stumbled upon …something he shouldn’t know.

Although purely fictional, the novel does reference back to an actual twenty-five-year-old art heist from Boston’s Gardner Museum.  As a side note and for you treasure hunters out there, The Museum offers a $5 million reward for any information leading to the recovery of these works.  Peyton Cote is a strong female protagonist.  She’s a single mom trying to balance work and home life.  She can be tough when she needs to be, but she’s also not afraid to show her compassionate side.  The novel has an international twist and an explosive end that I just didn’t see coming.  It is third in a series, but can be comfortably read as a stand-alone.  Rating: 4 out of 5.