from FictionZeal.com re: Skeleton Run by John L. DeBoer 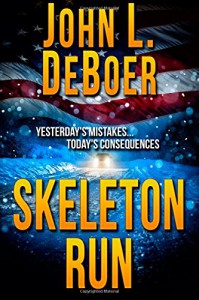 This is about how ugly human nature can be — the ‘think of yourself first’ mentality.  They were just boys in 1995; freshmen at the University of Vermont.  They’d been drinking.  It was a bad night with snow and low visibility.  They didn’t see the car in front of them until it was too late.  One of them checked the driver.  Dead.  In the back seat, a baby lay snuggled in a car seat in a blanket.  It was alive.  They left the scene.  The baby would be fine.  They’d call 911 when they got back to the dorm.  Jim Dawson reflected the consequences of reporting themselves, “In the short term, I’d be grounded for sure.  But I could imagine how this incident could forever mar my reputation.  I’d be one of ‘those boys’ – the drunken teenagers on a joyride who killed a woman.”

Things have a way of coming back on you.  Twenty years later, one of the four is dying of AIDS.  He calls his friends together while he’s in the hospital.  What he admits to them is how the ‘incident’ has continued to haunt him all this time.  He didn’t realize when he began talking that the nurse was still present.  They all have reputations that could be forever damaged if someone reports them.  Jim is a doctor; Bob Krechman is a retired football player; and Al Granger, who has the most to lose, is the Governor of Pennsylvania and considering a Presidential bid.

We see this story from many different angles.  We have the boys themselves; their wives and families; the nurse who just happens to know the baby, now grown; and Granger’s backers who have a personal interest in his campaign.  The story is told from Jim Dawson’s perspective.  He had not even told his wife of their secret until now when the future had become so uncertain.  The only aspect that was too unbelievable was that it was built upon coincidence that the nurse knew the man who’d been orphaned.  This is an engrossing tale of how these three men will withstand having their reputations destroyed.  How far will they go to save those reputations?  Rating: 4 out of 5.