from FictionZeal.com re: Don't Talk to Strangers by Amanda Kyle Williams 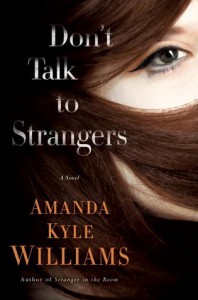 In this episode of the Keye Street series, she’s been hired by Sheriff Ken Meltzer from Whisper, Georgia to investigate two thirteen-year-old girls who’d been abused, killed, and dumped like trash in a highly wooded area near Lake Oconee.  The Sheriff had reason to believe it is the same killer even though Melinda Cochran had been missing for eight months, and Tracy Davidson had been killed ten years prior.  The two seasoned cops in the department offer little cooperation and plainly didn’t want Keye coming in and taking over their case.  While Keye is putting together a profile of the killer, another girl goes missing.  They know that time is not on their side when Keye receives a note that reads, “Dear Keye, I’ve started hurting her.”

Keye Street describes herself best.  “I am a detective, private, a bail recovery agent, a process server, and a former criminal investigative analyst for the FBI.  And when I say former, I mean fired.  Capital F.  The Bureau likes their profilers sober.”  So, we know she’s not perfect … but hey, who is?  Although she’s imperfect, she’s pretty darn good with profiling the bad guys.  Somehow she seems to ‘get it’ when it comes to following their way of thinking and planning.  This is one of those series that I’ve managed to get caught up on.  I’ve rated The Stranger You Seek with 4 stars; Stranger in the Room with 4.5 stars; and now I’m giving Don’t Talk to Strangers 5 stars!  Yes, the author keeps making Keye Street more captivating and the plot more gripping.  Even the secondary characters are a lovable and eccentric mix.  The mystery is complete in this novel, but number three ends with a little teaser for Keye’s future, so now I’m strumming my fingers on the table waiting for number four to be released.