from FictionZeal.com re: The Readers of Broken Wheel Recommend by Katarina Bivald 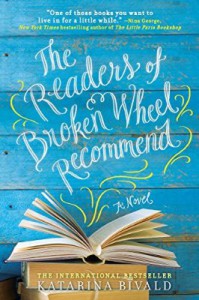 They began corresponding as pen pals.  Their writing turned rather quickly to discussing books and sharing books through the mail.  Sara Lindqvist, working in a bookstore in Sweden, lost her job.  Amy Harris invited her to come to Broken Wheel, Iowa.  They’d pick her up from the airport.  When the time came, and Sara made the long trip, there was no one to pick her up.  She made her own way to Broken Wheel to discover Amy had died.  Instead of meeting Amy, she met her close friends and her nephew, Tom, shortly after the funeral.

But, Sara didn’t pine away for the friendship that could have been.  She set out on a venture to open a bookstore in Broken Wheel with Amy’s books.  Amy had so many.  From Sara’s perspective, we read, “Amy’s room was like her dream library.  A large bed in the middle where Amy must have spent her days … Along each of the walls: bookcases.  The bedside table itself was a pile of books.”  Opening a bookstore was Sara’s way of giving back to the community of Broken Wheel.  Everyone had taken the greatest care of Amy’s friend, not letting her pay for anything and making sure she had someone to drive her wherever she needed to go.

As a reader who also likes to talk about books, I felt kind of sad at the outset of the novel, thinking about how it could have been for Sara and Amy.  They would have thoroughly enjoyed each other’s company — talking about characters in books as if they were real, talking about the plots, and maybe even agreeing on a couple of book boyfriends.  Even though the beginning is sad, the story is more about moving on and trying to make a difference.  The characters of Broken Wheel were a unique and enjoyable mix and I had no problem envisioning them.  The letters that Amy had written to Sara were interspersed throughout the novel, which helps to fill in the story quite nicely.  The plot is good, but the pace is more like a slow stroll and the story loses momentum.  After reading, I found out Katarina Bivald is a Swedish author and the book was originally written in Swedish.  It read so well, I would not have thought it to be translated.  Rating: 3.5 out of 5.