from FictionZeal.com re: Killer Ambition by Marcia Clark 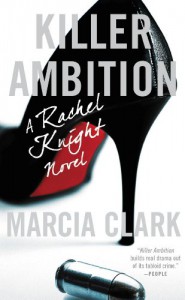 Not all of Hollywood’s celebrity status yields glitter and glam. Haley, sixteen-year-old daughter of famous director Russell Antonovich, has disappeared and it’s very curious that her good friend, Mackenzie Struthers, seems to know much more than she’s willing to say. Russell had received a couple of text messages. The first said, “I’ve got your daughter. She’ll be safe if you do as I tell you. If you call the police she’ll be killed.” Then the second was a ransom demand for him to bring “One million dollars in cash in a duffel bag” to Fryman Canyon. But when Russell pays the $1 million and his daughter is not returned as promised, he calls police. Detective Bailey Keller along with Special Trials prosecutor Rachel Knight begin to investigate the whereabouts of Haley.

One of the first people they talk to is Mackenzie. She does provide them with a picture of Haley’s latest boyfriend, nineteen-year-old Brian Shandling, but who is he? His ID seems to be fake, having belonged to a child who died in infancy many years before. It began to look like Brian and Hayley had cooked up the kidnapping scheme. If that was true, Rachel didn’t think he’d hurt her. Unfortunately, both Hayley and Brian were found murdered, presumably by the same person. The prime suspect turns out to be Russell’s best friend, Ian Powers, a former child star and also Russell’s talent manager. He’s arrested and this very high-profile case goes to trial.

The book is basically broken into two parts – the first part was mostly about missing teen, Hayley and the search for her killer. She was not a Hollywood show-off. In fact, she had a very tender heart for those less fortunate, like her friend Mackenzie. But, what Haley really wanted was her dad’s love and attention, and less in being given enough money to buy God. The second portion of the novel was all about a celebrity on trial for murder. This is where Marcia Clark excelled in her writing. After all, she lived the experience as part of the prosecution team in the O.J. Simpson famed murder trial. I did find it more odd than not for our protagonist, a DA, to be part of the initial investigation. The novel is lengthy, somewhere over 450 pages. I think additional editing could have clipped much of the excess out. Each book in the series can be read as a standalone as Clark does very well with recapping past events about our protagonist and supporting characters. But, if you love Legal Thrillers, you may want to go back and read the two before this one. Rating: 4 out of 5.